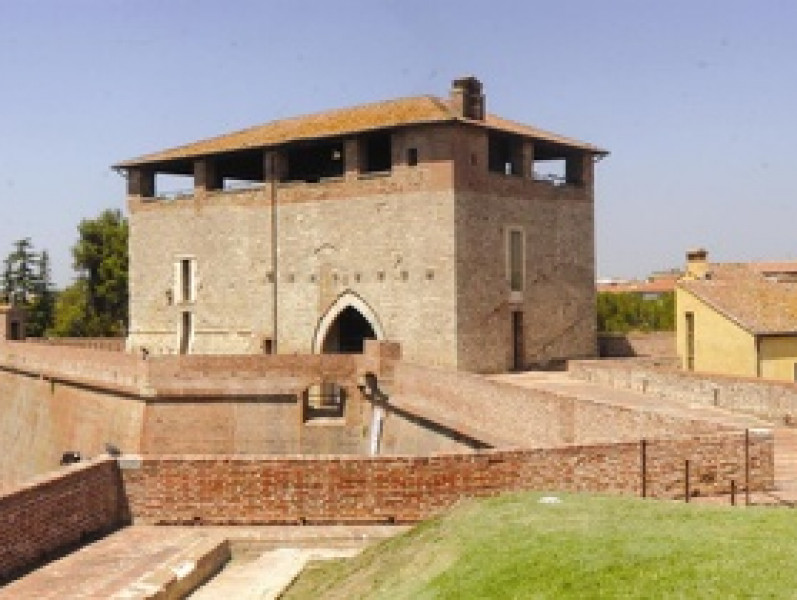 Medician fortifications of Grosseto can be considered, without a doubt, the most important monument and the symbol of the city, despite modifications and arrangements done throuh the centuries. This are a rare example of city walls wich are arrived almost intact to our days: they surround the city for a length of about 3 km and they are interrupted only where Porta nuovo is and where via Amiata is.

The historical contest where the walls saw the light is the end of the war between Charls V and the French allianz, in wich Grosseto was the strategical military base. We are in 1557 and the urbanistical plan of the city is goin to be changed.

The construction of new and cutting edge city walls is a priority for the medici family, despite the economical commitment and the prohibitive environmental conditions of Maremma. The most part of the building, wanted and financed by Cosimo I starting from 1565, was done in 1593 with the apposition of Medici coat of arms on the portal of Fortress bastion.

The wooden door was realized using the wood of the ancient drawbridge and it has replaced the balance system, made of a drawbridge and an iron gate connected with a mechanism that closed the gate when the drawbridge was opened and vice-versa. The project was given to Baldassarre Lanci who choose an exagonal layout equipped by six plygonal bastions.

The huge denfence system wanted by Medici has conserved its original shape. The function of public garden was decreted in 1850 by Leopold II of Lorena, to give this space to the city once the military vocation declined.

Starting from Porta Vecchia and walking clockwise we can visit:

Bastione dell'Oriuolo ("della Cavallerizza" today) dating back to 1574. The left side of the bastion was destoyed in 1882;

Bastione San Michele (todey it is called "del Molino a Vento" because of a mill that was destroyed in 1823) dateing back to 1571;

Bastione delle Monache (today it is called "Garibaldi") dateing back to 1577 and so called because of SS: Annunzuata Monastery, destoryed during the XVI century;

Bastione di San Francesco (today it is called Parco della Rimembranza and before known as bastione "Garibaldi") was built between 1576 and 1577. During the XVIII century it hosted the powder warehouse which was transformed in a citrus fruit cultivation during the XIX century. In 1924 Grosseto's Municipality decided to build Parco della Rimembranza on the bastion; trees were broke down and sostituted by a pinetree's, cypresses' and ilexes' little wood. The new trees were put in eight flowerbeds which converged to the centre of the bastion, where the War Memorial Monument was meant to be built. Each tree has an epigraph on caryin the name of a war victim. The park was completed in 1927 and inaugurated by Galeazzo Ciano on November 6th of the same year.

The actual War Memorial monument was realized on a project of Ippolito and Giuseppe Luciani and it was realized by Roberto Battelli di Pietrasanta. The moniment stands on a travertin basement with four semicircular tubs. A sqared travertin blok is in the centre, sutaining the obelisc; four lions are on the tubs: they were meant to sparkle water from their mouth, functioning as fountains. A bronze star is on the top of the obelisc, substituting the flying eagle carrying a laurel crown whic was on top when the onument was built.

An arhaeological walking was realized between Parco della Rimembranza and bastione Fortezza in 1960. It hosted some stone Roman finds. Everything was along this walking was restored and put inside the new "Archaeology Garden" between Saint Frances Church and the ex Hospital.

The Fortress bastion contains Porta di Santa Lucia, originally a courtyard with two arches and a big tower which was complited in 1345, as an epifraph on the external side tells. The Medician re-use of the fortress complitely change the aspect and the function of the building, so that it is not possible to appeciate the original highness of it anymore. In 1765 it loosed the military function and became a representative building in 1840.

Bastione della Vittoria and bastione Santa Lucia faced the internal side of the city and they were accessible by a ramp interrupted on a side for wagon passing. Wagons were pull up by a winch attached to a beam located in a room. The fortress and the internal buidings were protected by this bastion. The defensive action was improved by the so called "cavaliere" (knight in english), a sort of raised embanckment on which cannons found place.

Defensive structures were also constituted by "garitte": lookout points  corresponding to each corner of the bastion. The ones which are conserved today are a result of XIX century restorations.

The very heart of the fortress was Piazza d'Armi (parade ground), a big courtyard on which two main buindings overlooked: weapons and food warehoses and military rooms. The space dedicated to the bedrooms of soldiers are nowdays arranged as a show space.

Piazza d'Armi was projected by Raffaello Pagani in 1590 and it presents a brick and sand stone pavimentation. Sandstone bloks reproduce the water canalization system underground. It is composed by eight cisterns and canalizations which collected rain water comeing from the roofs. A well is in the centre od the courtyard haveing the typical medici crest on it.

A small chapel dedicated to Santa Lucia (than Santa Barbara) is inside the fortress. it was built only for soldiers and deconsacrated in 1800.

Bastione dell Palle (today bastione Maiano) dates back to 1566. The original name is due to the presence of a garitta witha Medici Crest on it. Casino delle Palle was a weapons and powder warehouse, decorated by frescos inside. Frescos were distroied during a bombing. 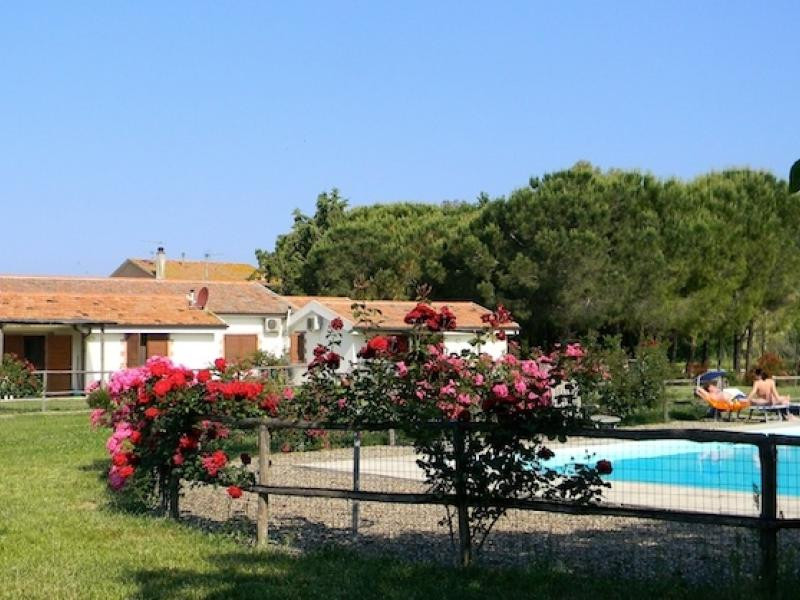 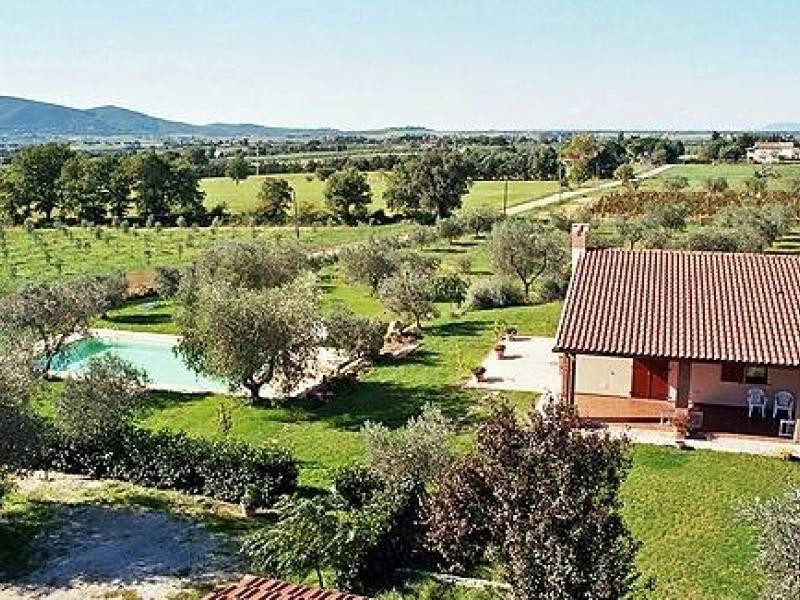 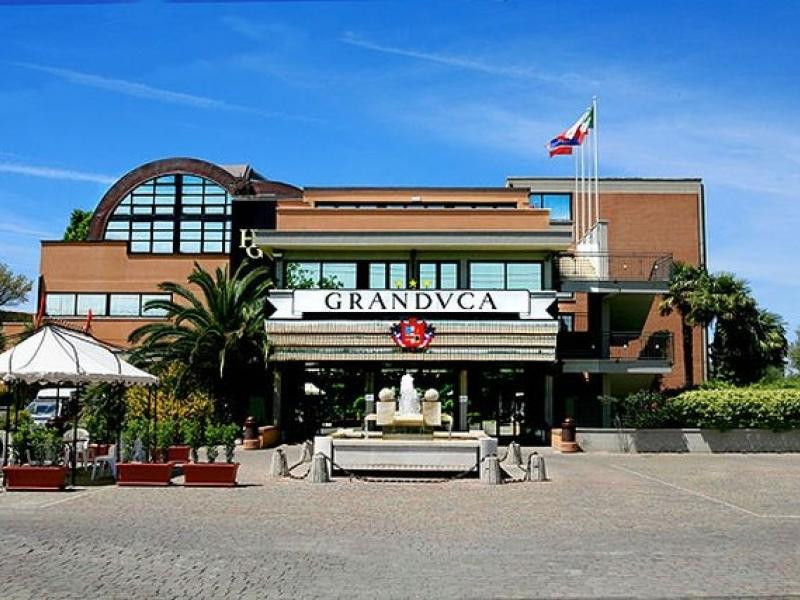 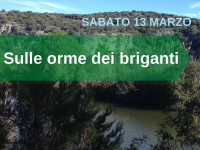 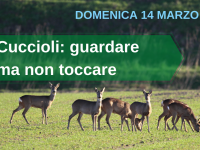 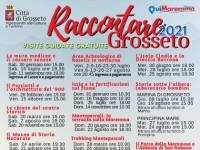 Grosseto Tellings 2021: the cherches of the historical centre